Henry Gurney photographed Zion Chapel A.M.E. Church in 1866, the year the congregation bought the building built in 1858 as the Second Presbyterian Church. Zion Chapel had earlier purchased the Methodist Church that fronted Union Street between Main and Franklin streets, but a fire destroyed it shortly afterward. A month before the sitting of the Annual Conference, the [minister Henry A. Jackson] seemed sensible of his death, and said to his members…that he had preached East and West, North and South…and now he had just as soon go to heaven from Natchez, as from any other point…a mighty man…has fallen…Just before he died, he said to one of the members, “Be still, be quiet, until I cross over.”Letter from Natchez, “Christian Recorder, Philadelphia, Pennsylvania, March 1, 1877Hiram R. Revels was the pastor of Zion Church in 1899 when the congregation acquired the church building. He served in the Mississippi Legislature, which elected him to the United States Senate, where he became the first black man in either house of Congress. He later served as president of Alcorn College. For more than a century, the house at 15 St. Catherine Street has served s the parsonage for Zion Chapel. It was built in the late 1880s on the hill across from where Holy Family Church now stands. About
1880 what appears to be a “snake oil” salesman stopped his wagon in front of Zion Chapel to peddle his medicines. His handling of a real snake may have added credibility to his product, which may or may not have really contained snake oil, once touted as a remedy for rheumatoid arthritis and other similar conditions. Ward Academy belongs to the A.M.E. church … The trustees have purchased a beautiful site on the north side of St. Catherine Street at a cost of $800… Last year we closed with one hundred and seventy students…For information about the Ward Academy, write to W.H. Coleman, 39 St. Catherine Street. Natchez, MISS.“Ward Academy,” Christian Recorder, Philadelphia, Pennsylvania, October 22, 1891Natchez had about 15,000 inhabitants… Zion Chapel A.M.E. Church was the largest, most intelligent, wealthiest, and most influential church in the Mississippi Conference. Revels A. Adams, Cyclopedia of African Methodism in Mississippi, 1902. Church member Julie Walker Harrison (far right) wrote and produced one of the early performances of the African American folk drama Heaven Bound as a Pilgrimage tour entertainment in 1932. Heaven Bound pioneered black theater in the south and avoided stereotypes like racial dialect. Zion Chapel served as Red Cross headquarters in the aftermath of the nearby Rhythm Night Club fire in 1940. Considered to be one of the most devastating fires in American History, the accidental fire killed 209 African Americans, many of whom died from smoke inhalation. 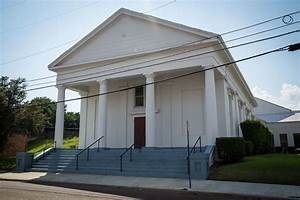