The Union School (above) was the first public school built by the City of Natchez for African American students. Built in 1871 by contractor P. E. Willman, the Union School was a grand brick edifice that stood at the southeast corner of North Union and Monroe Streets. It was demolished in the 1950s.

I am writing these last paragraphs in Natchez, where I have come to deliver the Commencement address at the school [Union School], with its 1200 students, and am now in the beautiful home of Professor Brumfield, the principal. I spoke before a representative audience of white and colored citizens in the same hall [Baker Grand Opera House] where Booker T. Washington was entertained upon his last visit to the city.
William Henry Holtzclaw, The Black Man’s Burden, 1915

George Washington Brumfield (above, young and old) was born in 1866 in Yazoo County, Mississippi, and moved to Natchez in the 1890s. For more than 25 years he was principal of the African American schools of the city including the Union School, pictured at left. In arguing for the construction of 1925 Brumfield School, the school board noted that the Union School for African American children had only 13 rooms and housed 948 children with as many as 120 children crowded into a single room. George Brumfield married Fannie Fisher, daughter of carpenter Joseph Fisher, who worked on the early – 1900s restoration of the historic mansion Melrose. He lived off Rembert Street in the St. Catherine Street neighborhood. Brumfield’s obituary in 1927 credited him as having developed the “colored public schools of this city to a point of efficiency that measures up to the highest standards.” The chairman of the school board eulogized Brumfield by noting that it was largely due to his efforts and the esteem in which he was held that the new Brumfield School was built.

The class of 1927 posed on the front steps of Brumfield School. Built-in 1925 at a cost of $75,000, the school was designed by local architect William Steitenroth and built by contractors Ketteringham and Lawrence. During racial segregation, Brumfield was a social center for the African American community. Its auditorium hosted performances of jazz musicians including Lazander Kinds, Joe Jennings, Robert Hinds, and Robert Granville. Brumfield closed in the 1980s and was later rehabilitated as apartments.

For about 12 years [after Rhythm Club Fire] we didn’t have a band in the black high school because there wasn’t a band director. My father 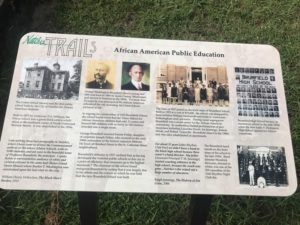