Henry Dumas poses on the front steps of 69 St. Catherine Street. Henry managed the Dumas Pharmacy at 707-09 Franklin Street, a building that also housed the medical practice and sanitarium of his brother Dr. Albert W. Dumas, Sr. In 1940 Dr. Dumas served as the president of the National Medical Association, the national organization of African American doctors.

In 1886 O’Brien and Company surveyed their St. Catherine Street brickyard into building lots. The following year former black Congressman John R. Lynch speculatively bought three of the lots, one of which became the site of the long-time home of the Henry Dumas family.

Lynch sold Lot 3 to Minor Davis and wife Mary, who built the house at 69 St. Catherine Street (above) about 1889 and sold it in 1895 to William and Sadie Miller.

In 1907 the house became home to Henry and Ida Dumas, whose family owned the house throughout the twentieth century.

Ida Page Dumas was the sister of Margaret Page McGuire of 129 St. Catherine Street. The McGuire and Dumas families enjoyed life in the same neighborhood with their intertwined families.

After the deaths of Henry and Ida Dumas, the house became home to their son Henry Page Dumas and wife Neva who were childless. Dumas family ownership ceased at their deaths.

An elderly Ida Page Dumas stands on the front gallery with housekeeper Celie Screws, who grew up at Melrose, the antebellum mansion now owned by the National Park Service. Celie Screws’s mother Alice Sims was born into slavery and worked at Melrose where she lived most of her adult life. Her husband George Screws worked at Melrose and Elms Court.

Henry and Ida Dumas are young in the photograph above. The marriage produced two children, Henry Page and Althea.

Henry Page Dumas sits beside his older sister Althea, who survived but was badly burned in the 1940 Rhythm Night Club fire. 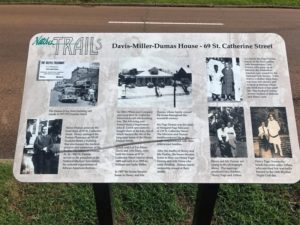