“We exist to tell our story”

The Natchez Association for the Preservation of Afro-American Culture, NAPAC, was created in 1990 to present and preserve cultural and historical contributions of Afro-Americans in the growth of Natchez and the nation.

In 1979 Mary Lee Davis-Toles began developing the concept of preserving Natchez Afro American history and culture. After many years of groundwork, on Sunday, February 17, 1990, Mary Lee Davis-Toles, Patricia A Washington, Josie Gilchrist-Camper Flora Terrell, and Mary White formed NAPAC. The group applied for a charter and one was approved in March of 1990. 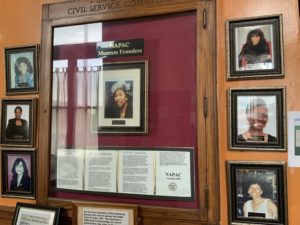 The women behind napac

Without these women, we would not exist to tell our story. :

Helping All understand our history

We depend on  your interest and support to help us continue to research and supply the untold stories of African Americans as well as search for ancestral links: